A tip of the iceberg: Salinlahi calls for probe into killing of Fabel Pineda, other state-sanctioned abuses during lockdown

JUST A TIP OF THE ICEBERG: Salinlahi calls for probe into killing of Fabel Pineda, other state-sanctioned abuses during lockdown

“This may be just a tip of the iceberg. There are more victims who are anxious to come out and tell their horrible ordeals. Alarmingly, the killing of Fabel Pineda sends a chilling message to other children victims of rape and other forms of sexual violence especially when it involve men in uniform,” said Salinlahi Alliance for Children’s Concerns Secretary General Eule Rico Bonganay who condemned the killing of Fabel Pineda, a 15 year old girl who was gunned down after filing rape charges against two cops in Cabugao, Ilocos Sur.

There is a consistent narrative indicating the increased number of abuses and violence perpetrated by state authorities in the recent months. “The draconian measure imposed by the government to contain the deadly disease has given our police authorities so much power as well as blanket protection in case they commit crimes. There are no safeguards in place making it very vulnerable to abuses and excesses. At the same time, the abusive practices bolstered under war on drugs such as kotong (extortion) and “palit puri” (sex-for-freedom) prevail up to this day,” he opined.

Salinlahi received numerous reports of violations committed by state forces against women and children who have been arrested and detained for supposedly violating curfew hours. Last June 19, Salinlahi has accompanied some parents of these children to the Commission of Human Rights (CHR) and Department of Interior and Local Government (DILG) to file a petition against a Marikina Police Precinct chief for abusing children including sexual harassment of a 17-year old girl.

“There’s really a need for concrete interventions from local and international human rights bodies to fully, thoroughly and independently investigate all the state-sanctioned violations committed under quarantine period. The Duterte government must be held accountable for coming up with a militaristic approach to the pandemic that further promotes the culture of violence and impunity,” Bonganay emphasized. 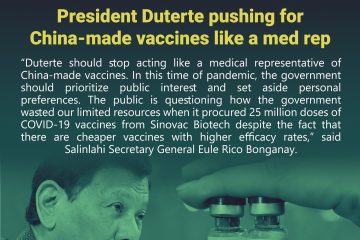