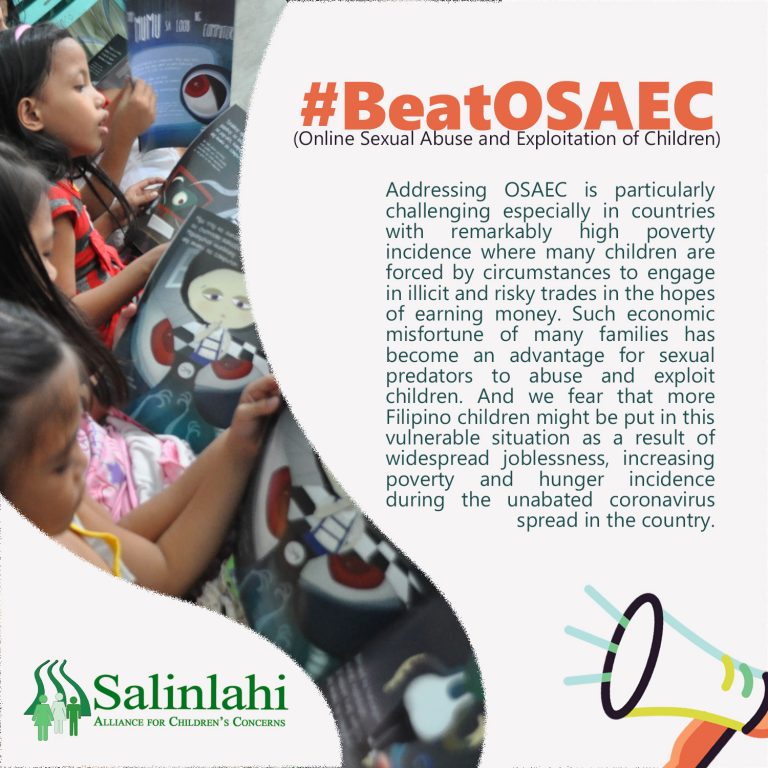 In observance of World Day Against Trafficking, Salinlahi raises alarm over rising number of Online Sexual Abuse and Exploitation of Children

As we commemorate World Day against Trafficking today, we are again reminded of our promise to children in changing the world and in turning it into a better place in order to see hopes in their eyes.Abuses, violence and exploitation happen everywhere. Alarmingly, the Filipino children tend to become very much vulnerable to these vicious acts due to the prevailing socio-economic and cultural contexts in the Philippines.

While some indicators show the significant changes that have been made over the past decades in the country, data on child rights protection issues clearly illustrate the failure of the government in fulfilling its commitment to protect and uphold the rights of children as enshrined under the United Nation Convention on the Rights of the Child (UNCRC). Despite the so-called economic growth, children across the country continue to face barriers to the full realization of their rights, affecting their long term-development.

Addressing OSAEC is particularly challenging especially in countries with remarkably high poverty incidence where many children are forced by circumstances to engage in illicit and risky trades in the hopes of earning money. Such economic misfortune of many families has become an advantage for sexual predators to abuse and exploit children. And we fear that more Filipino children might be put in this vulnerable situation as a result of widespread joblessness, increasing poverty and hunger incidence during the unabated coronavirus spread in the country.

We cannot fully underscore the harmful impact of the online sexual abuse and exploitation to children with the abuse being performed or facilitated by their own family members or neighbors whom they trust. Alarmingly, children as young as a few months old have been undergoing such traumatic ordeal. OSAEC leaves children a lifelong scar. It robs them of their childhood and deprives them the access to opportunities that are essentials for their development. Worse, they may be chained to the vicious practice of engaging in sexual activity in exchange for payment.

The issue of OSAEC is not a new thing. It thrives and draws breath from government’s neglect, indifference and failure to resolve the hapless plight of marginalized and vulnerable children. Despite decades of persistent campaigns of victims and advocates, there’s still a need to establish and develop a comprehensive and coordinated national response to make the digital space and online platforms safe for children.

We need to call on our national government to ensure that mechanisms are in place to address the current situation. The congress should exercise its oversight function to come up with a national situation analysis of the risks and responses to OSAEC as well as to address the gaps in our existing laws. At the same time, flaws in our criminal justice system must be decisively resolved. Support programs must also be strengthened and provided for the children victims.

Combating this crime requires an all-round approach that includes not only law enforcement, but also legislation, programs and policies, coordination of necessary services to children victims and cooperation with the public, media and even internet service providers. There should also be a particular emphasis on how to make children aware of the risks in using the internet and on how to educate them about their rights as well as their meaningful role in the society. More importantly, the government should address the social roots of OSAEC including poverty and social inequality.

As an alliance of child focused institutions, Salinlahi reiterates its commitment in upholding and defending the rights and welfare of Filipino children through its active participation in campaigns and advocacies in order to end all forms of abuse, violence and exploitation of children.