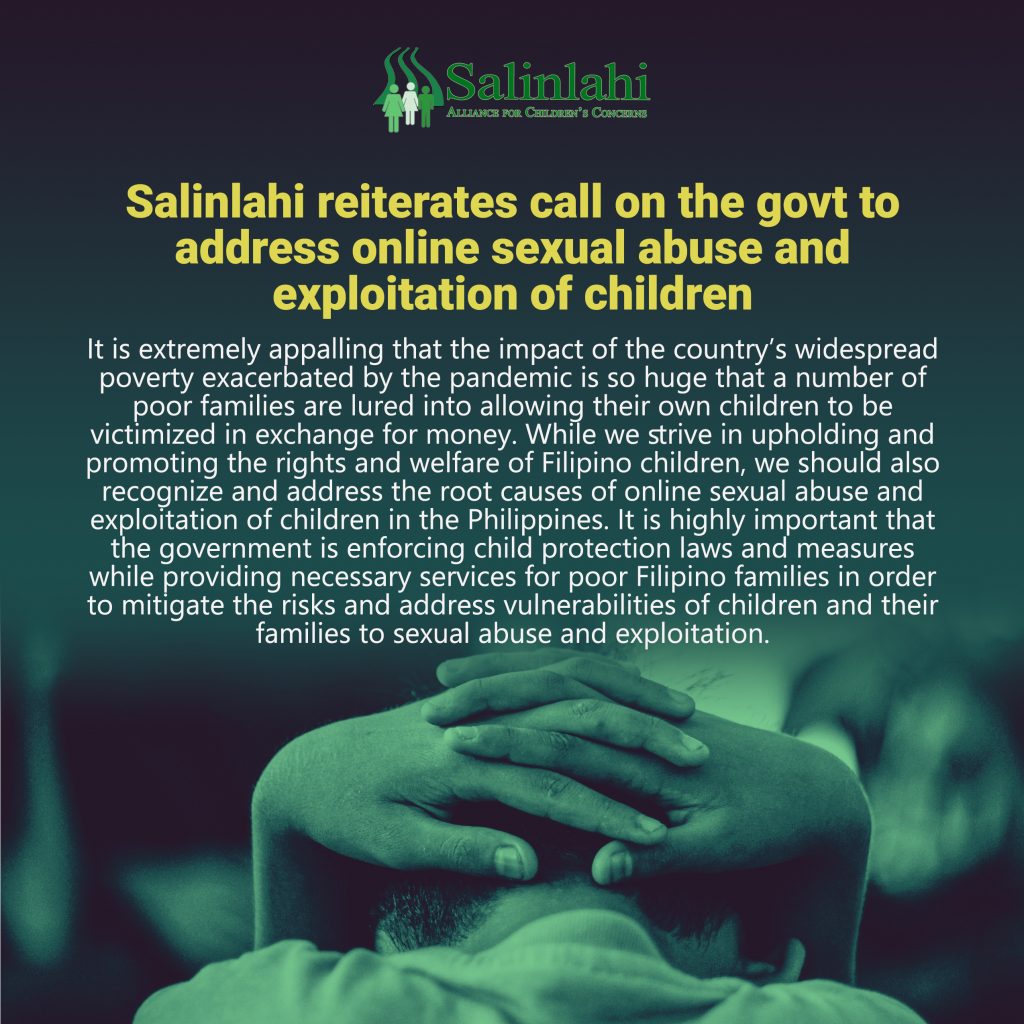 The Salinlahi Alliance for Children’s Concerns is excessively alarmed over the news that at least fifteen children were victimized by online sexual abuse and exploitation of children (OSAEC) in a cybersex den which was recently discovered during a rescue operation held by Police Regional Office 5 in Camarines Sur, Bicol last May 7.

According to a news report of Bombo Radyo Naga, Police Lieutenant Angelo Babagay of PRO 5- Anti-Cybercrime Unit said that the authorities immediately conducted an operation after learning the alleged child trafficking in the said area.

Babagay said that it is the family members who were forcing these children to perform sexual acts for Australian clients. The rescued minors, whose ages are ranging from 4 to 15 years old, are now in the custody of the Department of Social Welfare and Development (DSWD) for evaluation.

The Australian Government had previously monitored cases of child pornography in the area. The activity was immediately coordinated to the Philippine authorities. As a result, a rescue operation was conducted where four suspects were arrested who claimed that they committed the offence due to poverty.

Despite the recent successful rescue operations of children victims of OSAEC, most of us are still blind as to how many children are being sexually abused and exploited and why their families are resorting to such abominable trade as an alternative source of income in a desperate attempt to address economic adversities.

It is extremely appalling that the impact of the country’s widespread poverty exacerbated by the pandemic is so huge that a number of poor families are lured into allowing their own children victimized in exchange for money. While we strive in upholding and promoting the rights and welfare of Filipino children, we should also recognize and address the root causes of online sexual abuse and exploitation of children in the Philippines. Hence, it is highly important that the government is enforcing child protection laws and measures while providing necessary services for poor Filipino families in order to mitigate the risks and address vulnerabilities of children and their families to sexual abuse and exploitation.

The Salinlahi also reiterates its call on the Philippine legislators to pass into law the bills that seek to address OSAEC. We need a law that will protect our children from sexual abuse and exploitation. At the same time, flaws in our criminal justice system must be decisively resolved while support programs for children victims are provided and strengthened.

On the other hand, the law enforcement agencies must not only focus on the parents or relatives who are involved in OSAEC but also give emphasis in going after foreign perpetrators who exploit the dire situation of Filipino children. At the same time, the government must hold accountable the internet intermediaries and payment centers should they fail to report or act on OSAEC-related activities. ###