After Malacanang announced that Metro Manila and nine other regions will remain under general community quarantine, an alliance of child focused organizations in the country has once again called on the Duterte administration to ease the age restrictions by allowing children to go outside their house for play and recreational activities.

According to Salinlahi Alliance for Children’s Concerns, it has been almost a year since Filipino children were virtually locked up inside their houses with very minimal activities which immensely affected their physical and mental health. “The impact of the pandemic to children is appalling. It robbed children of the opportunities to enjoy their childhood and deprived them of their inviolable right to engage in play and recreational activities that are very essential to their development,” said Salinlahi secretary general Eule Rico Bonganay during an advocacy activity dubbed Let the Children Play which was initiated by the group at the Roman Garden, Barangay Jesus Dela Pena, Marikina city earlier today.

Bonganay noted that the group has been assisting children who have experienced emotional stress due to the prolonged home confinement, fears of infection, lack of interaction with same aged friends and classmates and boredom during the outbreak. “Cases of depression and anxiety are alarmingly high among children coming from poor families who have been experiencing economic adversity during the pandemic. There were also cases of suicide committed by some students that were attributed to the difficulties of the distance learning program,” he added.

During the program, Salinlahi has called on the government to open its door for a dialogue with child-focused institutions in order to set a clear program and guidelines in response to the alarming situation of Filipino children. “As signatory to the United Nations Convention on the Rights of the Child (UNCRC), the government should give proper attention to the concerns of Filipino children. While we battle against the deadly disease, it is also equally important for the government to implement measures in order to address the looming mental health crisis,” Bonganay emphasized.

In particular, the group urged the local and national government to designate safe spaces where children could hold play and recreational activities. “The government must ensure that children are safe not only from COVID-19 but also from any form of abuse, violence and exploitation. We strongly urge the inclusion of child focused organizations and advocates in the development of guidelines to ensure that the welfare of every Filipino child is prioritized,” he ended. ### 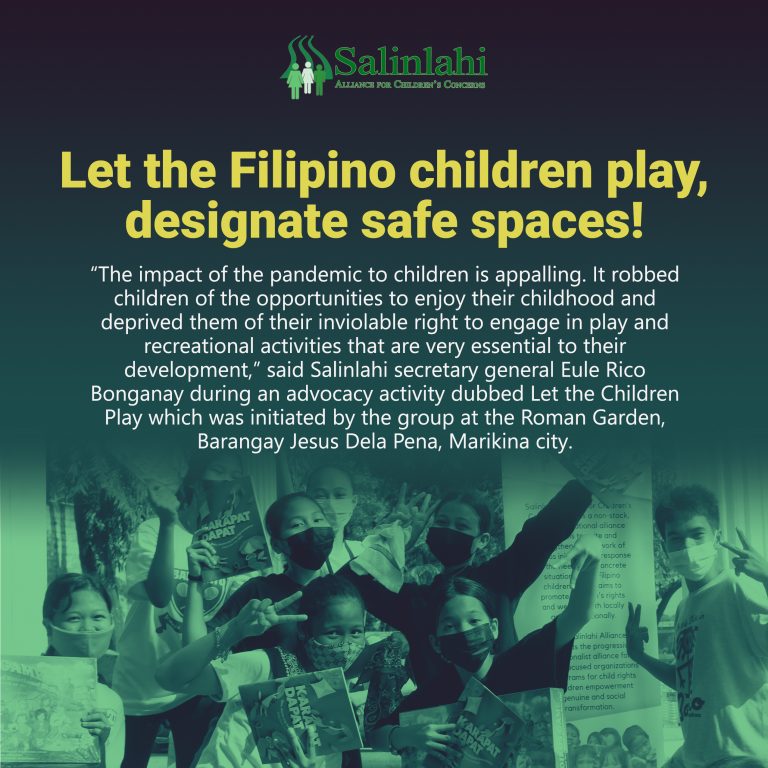